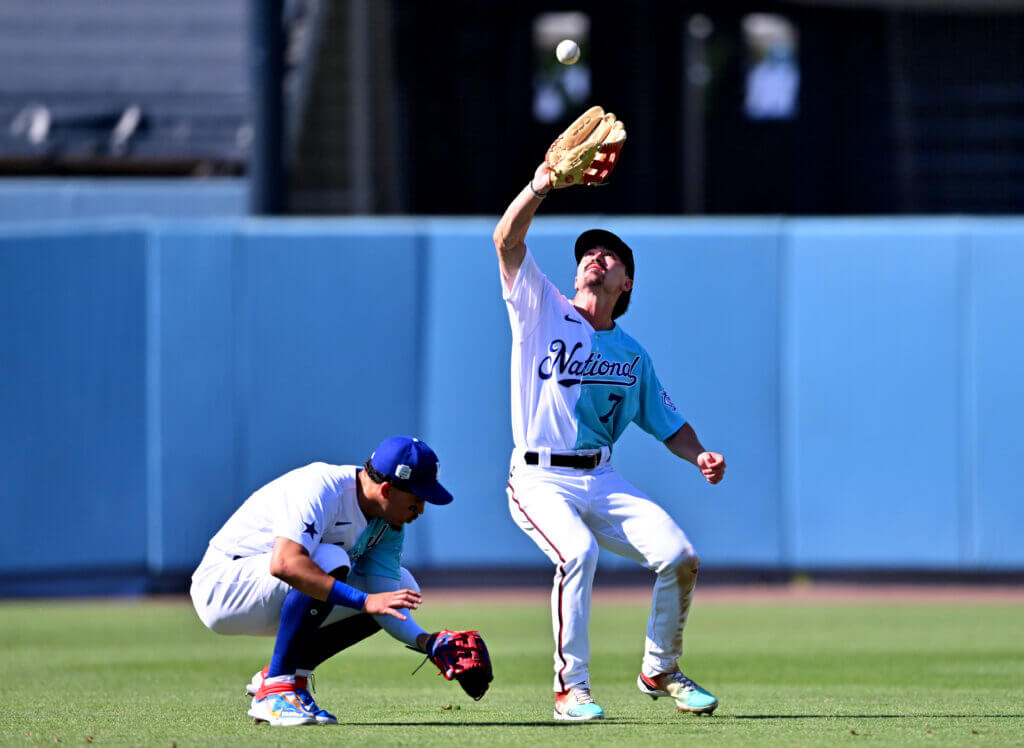 The flurry of calls from early prospects has created weekly excitement around our leagues’ FAB races, but over the past two months the process has taken a little less sizzle. If you’ve been thrifty for the past few weeks ahead of the August 2 trade deadline, will you be rewarded with impact players to bid on?

Looking at the organizational depth charts of potential sellers such as the Diamondbacks, Athletics, Nationals and Cubs, there doesn’t appear to be many top prospects waiting to be unlocked through a trade. The most exciting possibility is that Corbin Carroll could make the leap to the majors once David Peralta is dealt. The Diamondbacks’ top prospect has continued to rake and run since his promotion to Triple-A Reno, slashing .278 / .469 / .611 with five stolen bases in 49 plate appearances. Although he doesn’t seem to need it, the Diamondbacks may choose to leave Carroll in Reno, but they will certainly still have a void to fill. Fellow countryman Dominic Fletcher (.320, 11 homers between Reno and Double-A Amarillo) or 26-year-old Stone Garrett (.285, 25 homers, 15 stolen bases in Reno) might take a look instead.

Even though Carroll’s promotion is far from certain, it makes sense to bid on him this weekend. If the Diamondbacks don’t clear him a spot by the bid deadline, there could be a lot less competition for him in your leagues than if he’s called up Monday or Tuesday and you bid on him the following weekend. If you don’t have a place to hide Carroll as long as he stays in the minors, another Diamondbacks outfielder to consider is Jake McCarthy. A trade from Peralta would solidify his playing time, although he has already started eight of the team’s last 11 games, and with a possible deal for Christian Walker could propel him into the middle of the batting order. In 2021, McCarthy showed power and speed in Amarillo and Reno (15 homers, 14 doubles, 11 triples, 29 stolen bases), and he improved his contact skills in Reno this season (strikeout rate 13.3%). That skill set hasn’t fully translated into his 120 plate appearances at Arizona this year (.252, three home runs, three stolen bases), but he already does enough to be viable in 15-team leagues. McCarthy is barely listed and could probably be added with an offer in the range of 1-2% of the total FAB lineup.

While Carroll is the prospect we’ve all been waiting for, there is another highly regarded prospect who may have a clearer path to major league employment in the next two months. Let’s take a look at what could happen in Oakland…

Shea Langeliers, C, OAK: As reported by Athleticism‘s Ken Rosenthal, the teams have shown interest in Sean Murphy, and his departure would almost certainly herald the arrival of Langeliers, who is arguably the A’s best prospect. Even if Murphy stays put, there would be room for Langeliers to serve as a part-time receiver, part-time DH, just like MJ Melendez was for the Royals earlier this year when Salvador Perez (thumb) was healthy. The 24-year-old is batting .276 with 18 home runs and five interceptions for Triple-A Las Vegas this season, and he would immediately become a go-to hitter in two-receiver leagues and even some deeper one-receiver leagues once. promoted.

Bryson Stott, 2B/SS, PHI: At first glance, there is little in Stott’s profile to suggest he should be registered in 12-team leagues. He’s batting .195 with just seven homers while hitting in the bottom end of the Phillies’ batting order, but once you realize those seven homers have been hit since the start of June, there’s a little more to it. ‘plot. Stott still isn’t hitting with much raw power, averaging 91.1 mph out speed on fly balls and line drives (EV FB/LD) since June 1, but making more frequent contact, he gave himself a chance to enjoy some energy-saving environments. Four of Stott’s home runs have come to Citizens Bank Park, and his road runs have come to Toronto (two) and Milwaukee (one). Stott has hit at a modest 11.2% since June 1, and that, along with a 10.0% walk rate over that span, makes him uniquely worthy of adding points leagues.

JJ Bleday, DE, Marlins: Bleday’s flyball-heavy approach didn’t pay off in 2021, when he batted just .212 with 12 homers at Double-A Pensacola. He brought the same approach to Triple-A Jacksonville this season and produced much better results. Bleday still only hit .228, but he hit 20 homers in 101 fewer plate appearances while posting a .365 on-base percentage. That performance earned the former first-round pick his first major league promotion and, so far, it’s more or less the same. Bleday was 4-for-22 (.182) in his first six games with the Marlins, but three of his hits (one homer and two doubles) were for extra bases. Heading into this weekend’s series with the Mets, Bleday has hit third for three straight games, and he thinks he’ll be an everyday player going forward. If you need average batting assist, Bleday probably isn’t for you, but if not, he should be added in all leagues with more than 12 teams.

Kyle Isbel, DE, Royals: Isbel, like Bleday, should get plenty of playing time going forward, thanks to the Royals sending Andrew Benintendi to the Yankees on Thursday. Isbel has compiled a .216/.253/.318 slash line with the Royals in 158 plate appearances this season, which would make his five stolen bases the only thing in his stat line to catch the attention of managers. fantasy. Going a level further, there is more to love. Isbel actually had frequent hard contacts (96.3 mph EV FB/LD), and given that his ground ball rate only leans slightly up (46.8%), it’s confusing that he only has two circuits and a .101 ISO. He’s almost universally available in mixed leagues, and worth trying out on 15 teams, just in case he starts adding home runs to his interceptions.

Jeimer Candelario, 3B, Tigers: It’s been an extremely disappointing year for the Tigers on their roster, but even though it’s too little, too late for their playoff chances, a regular is starting to wake up. Candelario is 16-for-48 (.333) with five homers, seven runs and 13 RBIs since July 8, and he’s hit six of 37 (16.2 percent rate). It probably won’t stay quite as hot in the final two months of the season, but at least we can rest assured that the version of Candelario that featured in the fantasy in the previous two seasons could be here again for the rest of 2022. .

Andrew Heaney, PS, Dodgers: This recommendation is strictly for shallow leagues, as Heaney is probably not available in all deeper leagues and a significant portion of 12 team leagues as well. Now that he’s back from his second stint in IL this season with a shoulder injury, Heaney is worth starting all over the place. The southpaw limited the Nationals to a single and three walks over four innings on Wednesday, and he expects to deepen his upcoming starts in San Francisco and at home against the Padres this week. Hopefully there will be fewer walks in those starts, but it’s fair to expect Heaney to come away with a bunch of strikeouts and a win or two.

Cole Irvin, SP, Athletics: Irvin is not among the players the A’s will trade before the deadline, but the expected departure of Frankie Montas could mean Irvin inherits a week of two starts. Oakland has a five-game schedule with Mondays and Fridays off, and they wouldn’t need to replace Montas in the rotation for two more weeks. If they stick to just four starters, that will line up Irvin for outings against the Angels and Giants. Even with the old start on the road, these could be matchups favorable for Irvin. I recently argued that he didn’t expect much regression from Irvin’s 3.05 ERA, making him close to a fixture in the 12-team leagues if he gets two starts. . Even a single start against the Angels could pay off, as long as you don’t need too many strikeouts.

Matt Manning, SP, DET: I’ll admit my expectations for Manning are limited, but there’s enough of his track record that’s encouraging to merit some consideration in the 15-team leagues – where he happens to be widely available. Manning (shoulder) is expected to join the Tigers rotation this week to start against the Twins, and he does so after going homeless in 20.1 innings at Triple-A Toledo. That’s no small feat after hitting 11 homers in 32.1 innings a year ago. Although Manning has been extremely willing to allow contact in the majors (14.7% career strikeout rate), he has been a batting pitcher (47.5% Area%) who is ahead of hitters (64 .3% F-Strike%) without getting bludgeoned (93.1 mph EV FB/LD). With a small increase in strikeouts, he could be useful with the right matchups – someone who can effectively go over six innings, much like Irvin or a friendlier version of Martín Pérez. Manning could even get two starts this week, possibly starting Sunday against the Rays after the Minnesota Tigers return.

Scott Effross, PI, CHC: There’s probably no closer who’s safer to trade than David Robertson, and Effross has positioned himself well to inherit his job. He leads the team in strikes (12) and trails only Robertson and recently promoted Steven Brault in average leverage at entry (1.72 gmLI) over the past 30 days. Effross won those high leverage appearances by missing bats (30.9% CSW%), getting chases (36.4% O-Swing%), keeping runners off base paths ( 1.02 WHIP) and coming off the dash (2.72 ERA). When Robertson needed a break on Monday, David Ross turned to Effross to nail a save against the Pirates, and a Oneil Cruz single was all he allowed. While the Cubs will likely come out of the trade deadline with a weaker offense, Effross could still collect enough saves to be worth adding in most leagues.

To note: Season-to-date stats are for all games played through Thursday, July 28.