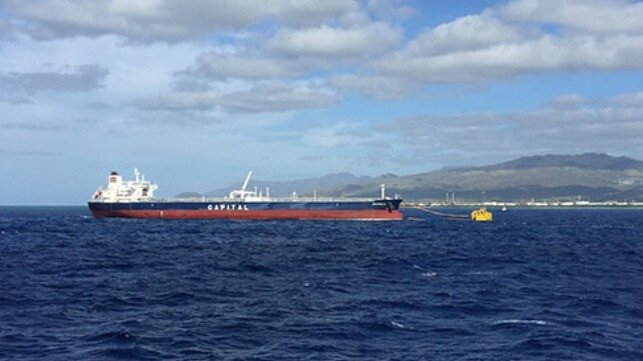 
The ban on importing Russian crude has led to a new call for Jones Act waivers – this time, to allow foreign-flagged tankers in US coastal trade. Congressman Ed Case (D-HI) has asked the White House to allow oil to be shipped to the Hawaiian market “from other domestic destinations on non-Jones Act vessels.”

Rep. Case supported the ban on Russian oil, but he noted that Hawaiian consumers will bear a greater share of the consequences of the ban than citizens of other states. Hawaii’s only refinery gets almost all of its oil from foreign countries, and about a third comes from Russia. Mainland domestic oil would be the best substitute for Russian imports, Case argued, but he claimed it was too expensive due to domestic shipping requirements.

“The costs of such transportation, even if initially available domestically, would be many times higher than transportation on the plethora of non-US-flagged specialty vessels,” Case said. “By some accounts, shipping oil from the continental United States to Hawaii, a much shorter distance than from foreign sources, costs nearly three times as much as shipping from Asia…These costs would be passed on on price increases that are already among the highest in our nation and would directly affect our Hawai’i-based national defense.”

The American Maritime Partnership, the association of Jones Act ship operators, pushed back against those arguments on Thursday, arguing that freight costs are only a small fraction of the final cost at the pump – and that oil prices are the real culprit of rising gas prices.

“Today, the capacity of American ships is more than adequate to meet all oil transportation requirements in the United States. Calls for waivers of the Jones Act are now both inconsistent with current law and unnecessary,” wrote Ku’uhaku Park, president of the American Maritime Partnership and vice president of government relations at Matson. “Waiving the Jones Act would impact the cost of transportation by less than one cent per gallon on average with no guarantee that any benefit would be passed on to consumers. Waivers of the Jones Act would simply put money in the pockets of oil traders and would provide no relief to consumers.”

The White House has yet to announce a position on tanker waivers, but President Joe Biden is a prominent Jones Act supporter. He invoked the requirements of the law in a “Buy American” executive order during his first week in office, writing that he “will continue to be a strong supporter of the Jones Act and its mandate that only vessels flying US flags transport goods between US ports. “

In addition to political considerations, the White House’s ability to grant waivers is more restricted than before, Remarks Charlie Papavisas, partner of Winston & Strawn. In early 2021, Congress introduced language in the annual defense appropriations bill to make the Pentagon’s power to issue a Jones Act waiver much more tailored. The Pentagon can now only issue a waiver for the purpose “of remedying an immediate adverse effect on military operations.” Previously, the DoD could grant a waiver for any “national defense” contingency — for example, responding to a hurricane.

The Department of Homeland Security can also issue a Jones Act waiver, but the same 2021 defense bill imposes a 45-day deadline on DHS waivers. Any long-term waiver would have to come from the Pentagon, and it would have to fit the “military operations” rationale, Papavisas noted.