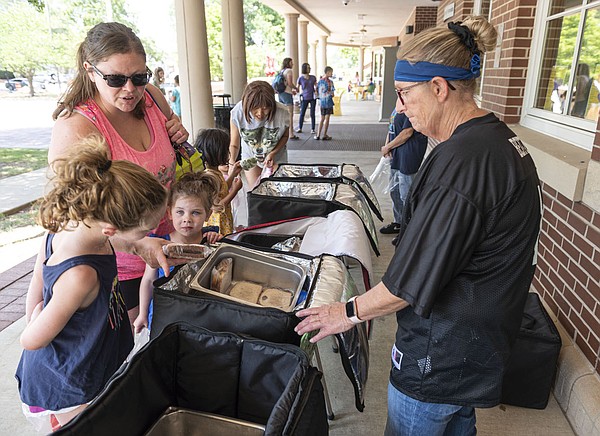 School districts in northwest Arkansas are preparing for federal changes that will help keep student lunch prices low despite inflation and supply chain issues, but will end free lunches for all children.

Schools have received federal waivers during the pandemic allowing them to distribute free meals to children regardless of family income and receive reimbursement. The exemptions expired on June 30.

The Keep Kids Fed Act was signed into law in June, giving schools, summer meal sites and child care programs additional resources through the 2022-23 school year, according to the U.S. Department. of Agriculture. The law will extend national flexibilities to summer meal programs through September. It will also provide schools with an additional temporary reimbursement of 40 cents per lunch and 15 cents per breakfast, as well as additional flexibilities to support schools as needed throughout the school year, the department’s website says.

However, the law does not provide for an extension of free meals for students who are not eligible for free or reduced-price meals.

School administrators in northwest Arkansas are urging parents to complete lunch forms to find out if their children will be eligible for free or reduced-price school lunches under federal guidelines.

Neisha Veihl, a parent of a fifth-grade student in the Siloam Springs School District, said free school meals for the past two years have helped her family. Veihl said she was on both sides of federal income guidelines and at one point only earned $10 too much to qualify for discounted meals. Before covid she said she was a bit worried about being able to provide lunches for her daughter.

“It became, do I put gas in the car to keep it running or send him lunch money for the week,” she said.

Veihl estimated that it would cost his family about $40 every two weeks to pay for breakfasts and lunches at school. She sends her daughter a packed lunch on certain days to stretch her budget, she says.

“We will have to make a little more budget [this fall]but I think we should be okay if we can also send the leftovers for lunch,” she said.

In comparison, schools in Fayetteville charge $2.15 for breakfasts, $3.15 for elementary lunches, and $3.35 for older students. Discounted meals are 30 cents for breakfast and 40 cents for lunch.

Food insecurity on the rise

According to Julie Damer, director of marketing and communications, more than 70,000 people in the four-county area served by the Northwest Arkansas Food Bank are food insecure. One in six children in the region faces food insecurity, she said. The nonprofit group serves Benton, Washington, Carroll, and Madison counties.

Damer defined food insecurity as someone not knowing where their next meal will come from. Food insecurity isn’t always tied to income and can happen to anyone, she said. For example, people may face unexpected expenses such as medical bills or have multiple generations living in one household, she said.

As inflation drives food and gasoline prices skyrocketing, the Northwest Arkansas Food Bank sees even more people struggling with food insecurity, she said. People are paying more than ever for things like utilities, rent and medical bills, putting them in situations where they need a little help, she said.

“We’re seeing people who weren’t expecting to be in this situation, asking for help with food, in our mobile pantry lines,” she said. “Fortunately, we are here to be able to fill that void for them.”

The Keep Kids Fed Act will help the Lincoln School District by giving it some leeway on guidelines for serving food and increasing funding, but it will be difficult for many families to start paying for school lunches again, said said Superintendent Mary Ann Spears.

The Washington County district, which has 1,007 students, had a free and reduced-price lunch rate of 70.5% during the 2020-21 school year, according to the Department of Education.

Federal covid-related meal waivers that expired on June 30 were a game-changer for Lincoln, Spears said. The district has seen better attendance at its meal programs and the waivers have helped its catering budget, she said.

The district has considered providing free meals to all students but is unable to foot the bill, she said.

School district administrators in Bentonville, Rogers, Springdale and Fayetteville also reported that more students ate at school in the past two years.

About 40% of Rogers students will have to start paying for school lunches again this fall, according to Charles Lee, assistant superintendent of general administration. A total of 60% of Rogers’ 15,335 students qualified for free and discounted lunches during the 2020-21 school year, according to the Arkansas Department of Education.

Parents will need to fill out applications for free or reduced-price meals and see if they meet the eligibility criteria, he said. Schools receive federal funds to provide additional services in other areas on the basis of free and reduced-price lunch rates, which helps the entire community when families submit forms, he said.

Schools in Rogers have been hit by rising food prices and have been impacted by supply chain issues that have forced the district to plan alternative meals, Lee said. Even with the extra federal money, the district will likely have to raise meal prices at some point, he said.

The Keep Kids Fed Act will prevent the Springdale School District from having to raise lunch prices this year, according to Gena Smith, Springdale’s director of child nutrition. Food prices are rising and shortages have forced the district to buy more expensive items in some cases, Smith said. The extra federal money will help the district cover costs and also give the infant nutrition department additional funds to spend on local food, she said.

Seventy-two percent of Springdale’s 21,882 students in 2020-21 qualified for free or reduced-price meals, according to the Arkansas Department of Education.

Schools have been given a waiver from having to collect new free and discounted eligibility forms from students who have already qualified for the program within the past two years, Smith said. The waiver prevented districts from seeing a significant drop in their free and reduced meal rate when families no longer had to apply to receive free meals, she said.

Completing free and reduced-price meal applications will not only help families find out if they are eligible for school meal assistance; it could also give them access to other benefits such as free or low-cost internet service, Smith said.

The increased federal refunds will help the Bentonville School District maintain the high-quality food it serves students, despite continued inflation, according to Janet Schwanhausser, assistant superintendent and chief financial officer. According to the Arkansas Department of Education, 20 percent of the district’s 17,970 students received free or reduced-price lunches during the 2020-21 school year.

The additional federal refunds will also help the Fayetteville School District deal with inflation and supply chain issues, according to Amy Jefferson, director of child nutrition. It’s likely the district will have to raise prices further in the future, she said. Meal prices under USDA guidelines have continued to rise even though students haven’t had to pay for the past two years, she said.

The Decatur School District, with an enrollment of 570 students in the 2021-22 school year, has been providing free lunches to all students since 2018 under the USDA’s Community Eligibility Provision, according to the Superintendent Steven Watkins. The program allows schools in high-poverty areas to serve free breakfasts and lunches to all students without collecting household requests, the department’s website says.

The Keep Kids Fed Act will still help Decatur because the extra 40 cents for lunch and 15 cents for breakfast will help with rising food costs, Watkins said. While the small district’s infant nutrition department has felt the impact of inflation, its size has helped it avoid supply chain issues, he said.

Sherri Beitz (right) with Aramark helps Chelsea Caspermeyer and her daughters Reagan, 7, and Rylee, 3, choose sandwiches Friday at a free summer lunch spot at the Bentonville Public Library. Waivers allowing all students to get free school meals for the past two years expired on June 30. The Bentonville Library is one of several summer feeding sites where children 18 and under can receive a free lunch during the summer. Summer programs are not affected by the change. Check out nwaonline.com/220716Daily/ for more feature photos from Northwest Arkansas and the River Valley. (NWA Democrat-Gazette/Spencer Tirey)

People get a free lunch Friday at the Bentonville Public Library. Waivers allowing all students to get free school meals for the past two years expired on June 30. The Bentonville Library is one of several summer feeding sites where children 18 and under can receive a free lunch during the summer. Summer programs are not affected by the change. Check out nwaonline.com/220716Daily/ for more feature photos from Northwest Arkansas and the River Valley. (NWA Democrat-Gazette/Spencer Tirey)

Patent waiver is not a silver bullet