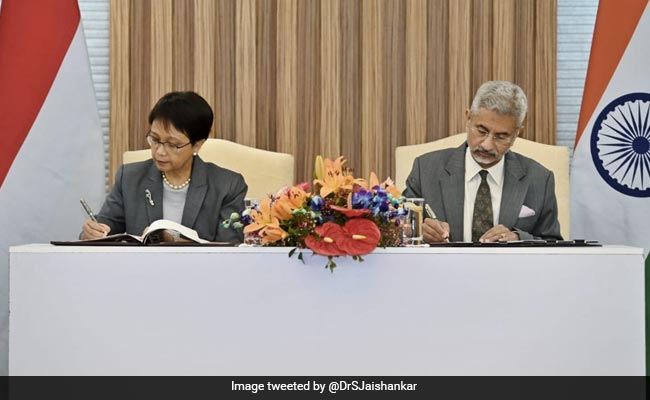 India, Indonesia discussed issues related to the Indo-Pacific, Afghanistan, Myanmar and the war in Ukraine.

India and Indonesia have renewed the agreement on visa waiver on diplomatic and official passports, Foreign Minister S Jaishankar said on Friday.

This agreement was renewed during the 7th meeting of the India-Indonesia Joint Commission held in New Delhi.

During the meeting, EAM Jaishankar and his Indonesian counterpart Retno Marsudi also discussed the India-ASEAN partnership and the countries’ cooperation at the UN and G20.

The two countries also discussed regional and global issues, including the Indo-Pacific, Afghanistan, Myanmar and the repercussions of the Ukrainian conflict.

India hosted the Special ASEAN-India Foreign Ministers Meeting (SAIFMM) on June 16-17, marking the 30th anniversary of India-ASEAN dialogue relations and the 10th anniversary of the country’s strategic partnership with ASEAN.

ASEAN Foreign Ministers, ASEAN Secretary General and Representatives of Foreign Ministers along with Dr Jaishankar today addressed the Ministerial Session of the Twelfth Edition of the Delhi Dialogue (DDXII ) which focuses on 30 years of ASEAN-India relations with the theme “Building Bridges in the Indo-Pacific”.

Launched in 2009, Delhi Dialogue is India’s first annual Track 1.5 Dialogue, which aims to enhance ASEAN-India relations in the context of the contemporary global and regional scenario.

The SAIFMM was co-chaired by EAM Jaishankar and Dr. Vivian Balakrishnan, Minister of Foreign Affairs of the Republic of Singapore.

(Except for the title, this story has not been edited by NDTV staff and is published from a syndicated feed.)