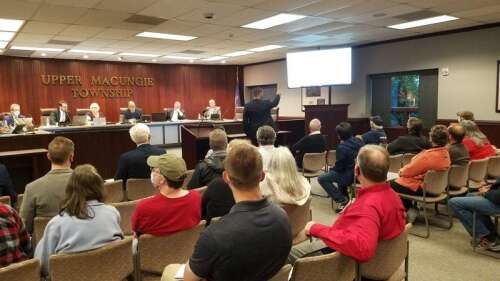 Special for the press

Much of the Upper Macungie supervisors meeting on May 6 was devoted to discussing a number of waivers for a proposed new Sheetz.

Community Development Director Daren Martocci said the claimant appeared before the township planning commission, which made recommendations on 10 exemptions for the Sheetz, proposed to be located at 951 Trexlertown Road.

“This is really the first step in a three-step process,” Martocci said, noting that the project also requires future conditional use approval in order to move the land development process forward.

He also said that according to the township code, the applicant must meet all local, state and federal requirements before proceeding to the conditional use stage.

Township engineer David Alban introduced the exemptions starting with a request to allow the plan to be treated as a preliminary / final project, since the Sheetz would not be a phased project.

This was accepted by the supervisors.

The second variance, regarding the width of the project’s access drive, has been removed, and Alban has stated that the developer will instead follow SALDO’s requirements.

The third waiver related to the requirement that the centerlines of access roads be located 300 feet or more from an intersection.

Alban explained that this pertained to the proposed right-hand access route along Trexlertown Road, which is currently located within 300 feet of the Cross Creek Drive / Ruppsville Road intersection.

Alban said the developer modified the driveway so that it was only accessible in response to requests from staff.

He explained that the design was originally a straight / straight design, but said the straight part was removed because it moved traffic directly into an intersection.

He added that the developer had changed the design and added a proposed driveway with exit only to Ruppsville Road for cars only.

In public comments on the waiver, regarding a question as to why the distance waiver was requested, Eric Mountz of Traffic Planning and Design said the driveway was about 150 feet from the intersection.

He said there was nowhere along the front of the property that was 300 feet from the Cross Creek intersection or another intersection with Cetronia Road.

Council members approved the entrance waiver, as well as the following waiver of requiring street trees along the facades of Ruppsville, Trexlertown and Cetronia roads, provided the required number of trees is planted elsewhere on the property.

Alban said staff comments showed that most of the Cetronia and Trexlertown roads had overhead and underground utilities, as well as an existing pond, which made it impossible to plant trees.

Council then heard a request for a waiver of the requirement that all subdivisions and land developments improve the facades of roads along arterial roads.

Alban said the waiver was not intended to improve the facades along Cetronia Road and that the planning commission recommended denying the waiver and that the applicant was providing the widening or providing a fee instead of the improvements.

He said Cetronia, Ruppsville and Trexlertown are all state-owned roads.

The board voted to deny the waiver and ask the developer to provide a fee.

The next waiver was the requirement that sidewalks be placed along all facades of road sites.

Alban testified that the plaintiff requested an exemption not to place a sidewalk along part of Cetronia Road and along the frontage of Ruppsville Road.

He stated that the planning commission had recommended postponements for the portion of Cetronia Road and that the developer had built a sidewalk along Ruppsville Road.

Lawyer Blake Marles, speaking on behalf of the plaintiff, said it made sense to have a sidewalk in places where it is likely and safe for people to walk, but said placing a sidewalk along de Ruppsville was of no use as there were only three residential properties on the stretch and the sidewalks would cause people to walk to an unmarked intersection and cross the street in an unsafe manner.

Council voted to maintain the planning commission’s recommendation, postponing the sidewalk from Cetronia Road and requiring it along Ruppsville Road.

The next waiver requested that the plaintiff not install a curb along the facades of Cetronia and Ruppsville Roads, which was postponed by council because both roads were owned by PennDOT.

The next exemption, which was approved, requested a waiver of the 300-foot distance requirement from the center line of access to an artery, as the planned driveway on Ruppsville Road is only 165 feet in length. separation.

Alban said this driveway was necessary due to the elimination of the right-hand exit on Trexlertown Road.

He added that the plaintiff noted that if the 300-foot requirement was met, the headlights would be polluted by outgoing vehicles shining in neighboring houses.

The next request called for the exit aisle only to have a 10-foot radius instead of the 20-foot requirement to help prohibit and deter trucks and other inbound traffic, as well as to allow a five-foot radius along. from Trexlertown Road to establish the straight lane.

This was also approved by the supervisors.

The final waiver for the evening was to be exempt from providing improvements and widening along Ruppsville Road as required by the township.

The council brought forward a motion to deny the waiver, as recommended by the planning commission, and asked the developer to provide a fee instead of the improvements.

Topics covered included the number of gas pumps and products sold to Sheetz, the classification of the project as a gas station, convenience store or automotive service station, potential issues with truck parking, increased traffic on the three roads around Sheetz and in the Croix Stream development, hazardous conditions and landscaping information, among other issues.

President James Brunell explained the waiver process, noting that the township and the applicant must follow a specific procedure and comply with the township’s SALDO, which included requesting waivers.

“Frankly, there can’t be anything that opposes the conditional use hearing,” Brunell said of all the waivers.

He, Martocci and attorney Andrew Schantz noted that many of the questions and discussions residents wanted to have – like the use of the site and its potential impact – would be more appropriate for the conditional use hearing.

Schantz said that in the next step, the plaintiff will have the burden of proof to comply with certain standards, including residents’ concerns about traffic, safety, impact on the neighborhood and other issues. .

“Your concerns are certainly legitimate and valid and should be presented in public,” he said, adding that any processes the township will follow will take place in public hearings, which the public is encouraged to attend.

“But at the moment, we are only focusing on waivers and motions.”

In response to residents expressing objections to the increased traffic to the Sheetz, Marles and Mountz noted that a traffic study had been independently prepared and reviewed by township engineers and PennDOT.

Mountz noted that convenience stores largely attract “passing traffic” already on the roadway and said the additional traffic drawn to the area would be “minimal.”

Marles also noted that the study indicates that 76 percent of traffic to the Sheetz “otherwise would go through the property[…]would be that people would take Trexlertown Road anyway and go elsewhere.

Atlanta to reopen all of the city’s swimming pools since the COVID-19 pandemic; waive admission fees – WSB-TV Channel 2