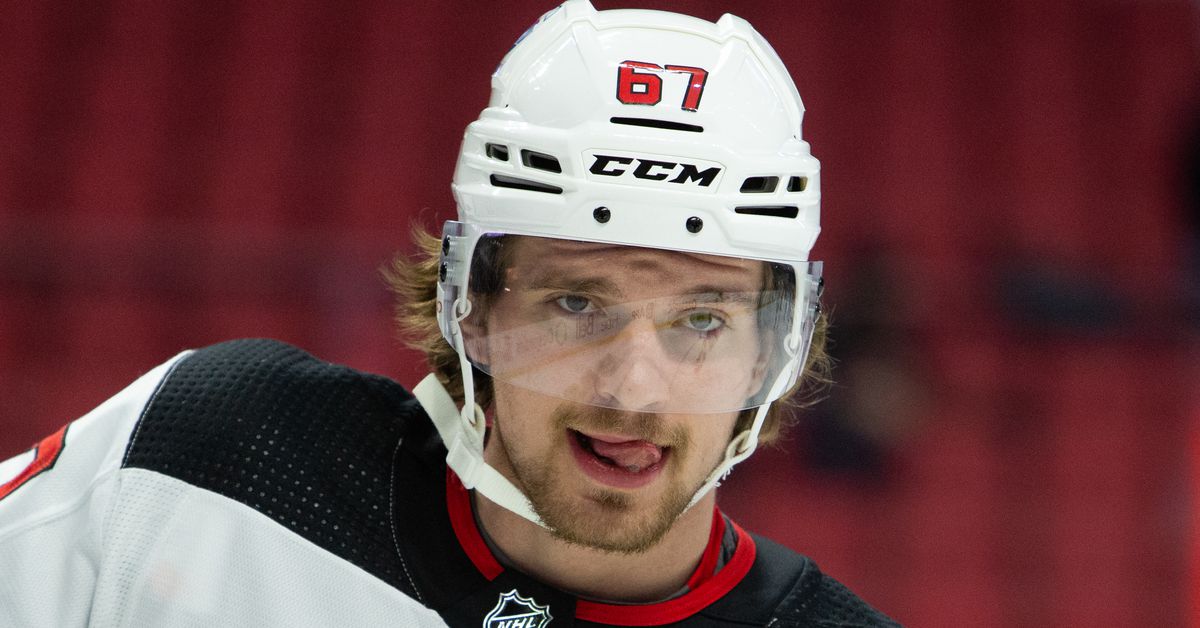 Today the New Jersey Devils visit the Pittsburgh Penguins. Jesper Bratt, Andreas Johnsson and Dougie Hamilton are expected to return to the roster. That last point is all the more important considering Hamilton hasn’t been on the ice since Jan. 2 when he took a puck in the face in Washington’s 4-3 overtime win. As Hamilton came off injured reserve, the Devils needed to remove someone from their active roster to make room. The team chose to demote Marian Studenic to do so. This meant he had to be placed on waivers and cleared before going to Utica.

Unfortunately, he would not approve waivers. Dallas filed a claim and Studenic is now a Dallas star.

It’s a bit disappointing. Studenic worked his way to the limit of the Devils roster this season after three seasons in the AHL. Although he made eight appearances last season, it was clear he was on an upward trend. In 13 games with Utica this season, he has 10 points. He managed to get into the lineup for 17 games with New Jersey. The 23-year-old winger has by no means set the world on fire with his only goal, zero assists and 24 shots on goal in those 17 games. In the 5v5 game, Studenic had one of the worst CF% and SF% values ​​among forwards; although his expected goal percentage was surprisingly positive. Maybe a function of getting roles in the last six and limited ice time on a bad hockey team, but still not great. Even so, you could say he was on the verge of being maybe too good for the AHL and still figuring things out at the NHL level. The rhythm was there, but maybe not the game off the puck. Still, for a fifth-round draft pick, that’s not a terrible set of results since most fifth-round draft picks don’t even see the NHL at all. Overall, though, it’s not as if the Devils have given up a nascent force at the NHL level.

However, the disappointment is that he wasn’t the worst player on the team that they could have let go. Not at all. Mason Geertsen remains on the active roster. I can’t tell you what the devils are thinking here.

Of course, some of the people who matter are already rushing to the comments (and the Gamethreads and the previews and the recaps and everywhere else) to defend the mighty Mason Geertsen. He is really tall. He can throw touches while he can actually follow an opposing player. He is ready to roll but does not win any of said rolls. He is potentially intimidating for normal people like you and me, but not at all for professional hockey players. He can play defense, which tells me that you see his position listed on a site like Natural Stat Trick but haven’t seen him play hockey. What it really hurts. He’s supposed to be able to protect the Devils even though he hasn’t done so once this season. He makes the team “less soft”, as if the concept of team toughness is the reason why the defense is exposed, the goalkeepers light up, the offense is inconsistent and the power play leans on a relatively hot streak (a hot streak?) from the first unit. You know, issues that have kept the Devils just 17 out of 50 games this season.

Remember when I wrote that Studenic had one of the worst CF% and SF% values ​​among Devils 5-on-5 forwards? Mason Geertsen’s 16 games are one of the few worse than Studenic in these statistics. And unlike Studenic, his xGF% on ice isn’t even close to 50%. Of course, Studenic only has one goal and 24 shots on goal. That’s one more goal and 18 more shots than Geertsen in almost as many games – and in a team where defenders are encouraged to shoot a lot. Geertsen is objectively the worst skater — both in position and actual skating skill — on the active roster. Still, between Lindy Ruff and Tom Fitzgerald, they opted to keep him and risk losing Studenic. This is now the second time management has intentionally kept an objectively bad, valueless player and lost someone else to waivers. Sure, Scott Wedgewood isn’t great, but he’s probably better than Jon Gillies.

I don’t know, maybe Utica said no to Geertsen and New Jersey didn’t want to risk ruining the Comets’ terrific season so far. Look, someone had to go there to make room for Hamilton’s return. The Devils didn’t pick the least valuable player to do that. As a result, they lost a depth up front that still has a bit of a future. Someone who can actually keep up with the pace of NHL play, at a minimum. It’s disappointment.

I will end on a more positive note. With Studenic now with the Stars, the Devils will have a little less competition for wingers if and when they need to call someone up. That may mean a few more appearances for Alexander Holtz, Nolan Foote and Fabian Zetterlund, among others. Zetterlund would be my pick as he’s out of contract this season and I’d rather see him on a third/fourth line than Holtz being subject to the depth of that 17-50 list. We’ll see when he gets his shot.

Will Studenic be terribly missed by the Devils? I do not think so. Was this supposed to happen? Absolutely not. It was avoidable. Do I wish the best for Studenic in Dallas? Yes, except April 9. Thanks for reading.