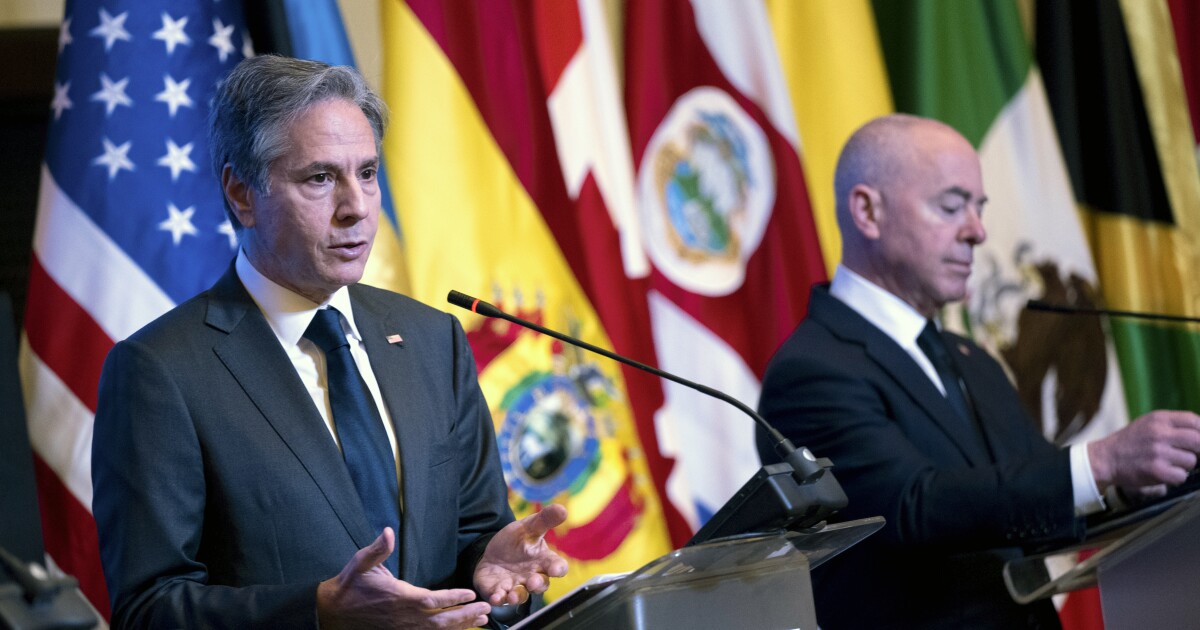 Blinken and Mayorkas give waiver to terrorists

PPerhaps the Departments of State Security and Homeland Security expected the entry that was slipped into the Federal Register go unnoticed.

In this entry, however, Secretary of State Antony Blinken and Homeland Security Secretary Alejandro Mayorkas changed the rules to allow people with terrorist groups or moderate involvement in such groups to enter the United States. United.

Their decision comes after Rep. Jim Banks questioned why the State Department granted a visa to Iranian actor Parviz Parastui, a staunch supporter of Iran’s late master terrorist Qassem Soleimani. Parastui afterwards
assaulted
an Iranian dissident. Indeed, rather than explaining the inexplicable, two of Biden’s most senior security officials are instead holding out a middle finger to Congress. The proposed changes go beyond one man. Differentiating between those who plant a bomb and those who simply finance or encourage the bombing is dishonest. Two decades after 9/11, Blinken effectively signaled that terrorism is not a black and white problem, but rather one steeped in shades of gray. In such circumstances, some acts of terrorism become more acceptable than other acts of terrorism.

The problem here is multiple.

The United States designates Iran’s Islamic Revolutionary Guard Corps as a terrorist organization for good reason. Although the Quds Force, previously led by Soleimani, was the tip of the spear, the IRGC and its corporate network provided a financial engine that allowed the force to operate with plausible deniability independent of the parliament’s budget process. Iranian.

While diplomats can accept the fiction that the IRGC enlists innocent Iranians, it is false. Iranian men are subject to conscription into the army, but whether for ideological reasons or because they seek better pay or opportunities within the bureaucracy of the Islamic Republic’s theocracy, some volunteers for the more elite IRGC. To absolve them of their actions cannot be compared to the murder of hundreds of Americans.

The same goes for the Lebanese Hezbollah. Like the IRGC, Hezbollah has killed hundreds of Americans over the decades. However, many of those who join the movement do not intend to participate directly in operations against Americans or Israelis. When I visited Nabatiyeh, located in Hezbollah’s heartland in southern Lebanon, in December 2020, locals described how Hezbollah was hemorrhaging its members as its funding dried up amid the “maximum pressure” campaign. from Secretary of State Mike Pompeo. While it is good that the members have abandoned the terrorist group, these defectors have made a conscious decision to allow the killings for their own wallets and should not be allowed to visit the United States.

Too often, Europeans excuse Hezbollah by arguing that it is not just a terrorist group, but rather a broader political and social movement that runs hospitals, clinics and schools. This shouldn’t be relevant: if Greenpeace put bombs on the buses, would it really matter what they did with the spotted owls? Blinken’s policy, however, seems to embrace the European notion that effectively allows Hezbollah to get off the hook.

Such actions play into the hands of terrorist groups such as the IRGC, Hezbollah or, for that matter, groups such as Hamas and the Popular Front for the Liberation of Palestine which have set up NGOs to whitewash their activities.

Terrorism is a conscious choice, a tactic used to achieve unattainable goals at the ballot box or in the diplomatic salon. Legitimizing it gives it power. To believe that terrorism is only the work of those who brandish a firearm is particularly naïve. Equally dangerous are those who would provide material support or encourage it. There should be no shades of gray against the scourge. Unfortunately, as Blinken and Mayorkas think otherwise, people will suffer.

Michael Rubin (
@mrubin1971
) is a contributor to the Washington Examiner Confidential Beltway. He is a senior fellow at the American Enterprise Institute.

All-Star of the Orioles waiver request (and trade candidate)